The roots of the factory in Polomka go back to the 1980s when the communist ruled slovak government decided to build up a factory for large scale 3-layer boards for the furmiture industry. A huge industrial area in the beautiful area of the lower Tatra Mountains with over 30ha of ground was chosen. The factory called "DREVO KOMBINAT POLOMKA" was barely finished when the communist system broke down in the end of the 1980s.

The company then was purchased by several former managers ans shortly after sold to an american investment fond. The USA took over many companies in key-industries after the communist break down. By this the US could promote free-market-policy and democracy in an unstable period of time in the slovak republic.

In 2004, Helmut Rettenmeier managed to buy all the shares from the US-fond and to integrate Polomka into the Rettenmeier sawmill-group. In the beginning of the integration the production of the large scale 3-layer boards was continued although loosing money because of a unfavorable board scale. In 2006, an new production line for H20-Beams was installed increasing the on-site value addition. As the Rettenmeier group in 2006 was producing already shuttering panels in the second slovak plant "LIPTOVSKY HRADOK", the formwork product range was completed. 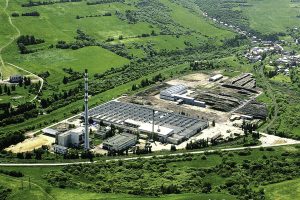 Our production site is located in the Carpathian mountains of the Slovak republic - better known as the lower Tatra mountains. The high-quality wood with its small annual rings is the basis for our products. The slovak republik is member of the European Union since 2004. The country is densly-wooded: about 44% of its territory is covered with forests, thereof 27% is spruce.
000
Mitarbeiter
0000000
3-Schichtplatten m2
0000000
Schalungsträger lfm
00000
Pelets Tonnen